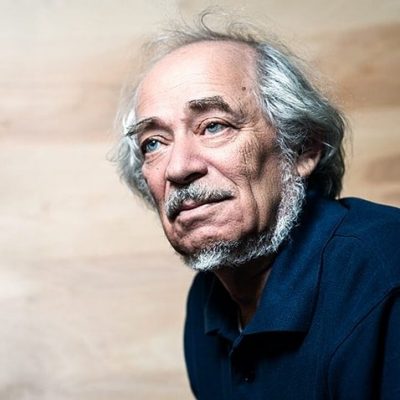 Searching tirelessly at the limits of the unexplored, between pure abstraction and realism, with his landscapes, still lifes and even his nudes, Turovsky opens up a new domain in the history of art in which all his work is underpinned by the relationship between the temporal and the timeless, very much a part of his oeuvre.

Mikhail Turovsky is one of the greatest artists of our time. His father, a soldier in the Soviet Army, died three months after the outbreak of World War II. Three days before the Nazis began their genocide, along with his mother and younger brother. He managed to flee from Kiev in a ramshackle boat on the river Dnieper. Once the war was over, he returned to his native city, but his family did not survive the war.

He moved in and began to paint. “I don’t recall a time when I didn’t paint,” he confesses. He studied drawing and pictorial arts in the Kiev Art Institute from which he obtained his degree in 1960. Then he continued his studies in the Moscow Academy of Art. The President of the Academy, Vladimir Sirov, took note of him and, impressed by the artistic gifts of the young student, took him under his wing, ignoring official bywords, thus launching him on his professional career. It did not take long before Turovsky became a consummate master of the “academic style”, with paintings exalting official Soviet subjects. He joined the Artists’ Union, the most famous and select association of painters in the USSR. He became so famous that the Government of the Soviet Republic of the Ukraine commissioned him to paint the official portrait of Leonid Brezhnev, Head of State of the USSR at the time. Turovsky exhibited in salons in Europe and South America. But he felt that Communism was fossilizing and restricting his freedom of expression. Although he enjoyed a privileged social position, not being able to paint the subjects that attracted him gnawed away at Turovsky. He couldn’t express himself freely, neither as a man nor as an artist. In those days, his present-day work would have been considered “pornographic”. In Russia, one could only paint nudes that depicted athletes or ballerinas in a triumphant pose. He wanted his work to portray his own revelation. He set out on the path of protest

A master of Contemporary Art

In 1974, he came into open conflict with the Regime. His exhibitions were censored. He couldn’t represent in its full breadth the tragedy of Babi Yar, the city whose Jewish dwellers had been massacred by Nazi troops. He came to the definitive decision that he could no longer live in a country that prevented him from reaching his artistic plenitude. Indeed he renounced all honours, privileges and fame. In 1978, despite threats, he finally managed to leave the Soviet Union and settle in the USA. In reprisal, the Soviet Government expropriated all of his work, several hundred paintings, declaring them to be national heritage. He took refuge in a run-down bodyshop in the Bronx. He discovered freedom. During the first years of his new life, he didn’t stop painting, day or night. His new subjects led him to produce authentic masterpieces. He dedicated many years to the Holocaust because he felt he had to contribute to the memory of Humanity. All his work on this subject ended up in museums (although it was exhibited at the headquarters of the United Nations in New York in 2009). New York, crucible of creation and miscegenation, caused him to experience a magnificent rebirth. Turovsky’s work reflects the shock between the culture of the West and that of the Eastern bloc. The vitality of North American artists, their audacity and their creative spirit fascinated him. These were years of change, a period of synthesis marked by the advent of colour. Tones intertwine, they meld, merging into one another to burst out in new colours and lights. Figuration, the body, provide a pretext but at no time are they the ultimate goal of his creation.

He makes and unmakes, forms and deforms the body, leaving it at the mercy of the movements that reinvent life in an instant that evokes the eternal. In his pictorial quest, he rediscovers the roots of the geniuses of the past. The legacy left to us by the different sensibilities of Abstract art in the last century enriches his art. As a result of his research, Turovsky undertakes a new Expressionist narrative, “Abstract Figuration”, as some art historians have called it. Searching tirelessly at the limits of the unexplored, between pure abstraction and realism, with his landscapes, still lifes and even his nudes. Turovsky opens up a new domain in the history of art in which all his work is underpinned by the relationship between the temporal and the timeless, very much a part of his oeuvre. “Contempt for the ephemeral bestows on Turovsky’s painting the force of time. More than a message, what Turovsky’s work leaves us is a link between yesterday and tomorrow” (Adeline Chenon, Le Monde). Miguel Turovsky has kept his distance from the main Modernist tendencies that have prevailed throughout the last twenty years. He hasn’t been identified with Pop Art, nor with Post-Painterly Abstraction, Minimalist Art, Conceptual Art, or the eccentricities of Neo-Expressionism. In reality, he has not attempted to align himself with any pictorial fad. His work transcends the temporal footprint of his era.

And yet, Turovsky is not the only artist to have obstinately followed his own path and managed to resist any attempts to classify him. So what makes him so unique? There are two reasons: his innovative vision, since he devotes more than sufficient attention to what he portrays (otherwise, they wouldn’t receive the importance they deserve); and his masterly use of colour, the texture he achieves when he brings together Realism and Abstraction, achieving at the same time a balance between both. These two complementary aspects are present in Turovsky’s oeuvre. He can be dark and austere (as for example in the series devoted to the Holocaust) if the subject matter he is dealing with so demands. He is the best pictorial narrator of the terrible catastrophe and the sufferings experienced by all social classes of the Jewish population. Turovsky shows us the traces of spirituality that survived the massacre. But even in these paintings his sensual pleasure in the pictorial matter shines through. A good example of this is the painting entitled Last lesson in which an old man can be seen with a boy in the foreground. Before and during the series devoted to the Holocaust, Turovsky’s paintings were almost monochromatic. But afterwards, in the series of nudes he painted from 1987 onwards, the artist proclaimed the whole of female sensuality, the source of life. He became daring with colour, freed himself from the ties distorting shapes. It was as if he had thrown off the shackles he had carried with him from his time in the Soviet Union, up to his exile in 1979. This new attitude towards pictorial art coincided with the new forms of expression that were appearing and that he adopted wholeheartedly. Thus, in December 1989, he travelled to the Berlin Wall to paint a 25-metre mural entitled “Gorbachev! You let me be, now feed me.” Again Turovsky decided once more to bear witness to history and to the responsibility accompanying it, as he already did when he painted the Holocaust cycle. In a book that has become a classic, the art historian and art lover Kenneth Clark, stated that “the English language has vocabulary sufficiently precise to differentiate between nakedness and nudity. Nakedness is the state of someone who lacks clothing. This word also evokes the shame we generally feel when we find ourselves without clothes. On the other hand, the word ‘nude’ used in a cultured sense does not have this connotation of shame. The vague image it projects in our mind is not that of a body turned in on itself and vulnerable, but rather a body that is balanced, splendid and sure of itself: the body remodeled.” Turovsky’s nudes are so determinedly Modernist with their broad waves of colour, one begins to doubt the duality proposed by Clark. But nothing could be further from the truth. Almost always (with very few, though certainly interesting, exceptions, like the painting entitled The Stolen Muses), Turovsky depicts women who are nude, not undressed, and give the impression of being comfortable with themselves and their environment. In Turovsky’s paintings there are no thick and vehement brush strokes, nor the splashes of the North American Expressionist painter Willem De Kooning. Turovsky directs his audacity with mastery and refinement. In some paintings, it might seem that the nude woman is aware of her state, leading the observer into temptation. Other pictures, on the other hand, lead to meditation. They differ from the Greek nudes (which are, par excellence, and in Clark’s opinion, “The Nude”) on this point: they not only represent a beautiful covering but, in addition, convey a broad range of emotions. As Turovsky has rightly said: “We are all born naked, men, women, children, the elderly, but it is women who give us life and love.”

Interpretations of the nude

The abstraction and audacity of the colours are associated with different interpretations of the nude, as can be seen in those yellows, blues, dull blues, intense blues, greyish blues and reds, applied in glazes or plastered on in abundance, as for example in the lower left hand side of the painting entitled Statue of Liberty. Although these chromatic spaces do not have any figurative function, they still maintain a subtle relationship with the tone of the work. The alteration of the shapes in his portraits is not mere chance but deliberate, with the aim of emphasizing one aspect or another of the sitter’s personality. If one observes at length the painting entitled “Rostropovich, the maestro”, one will see that the painter has added a cloak over his back and shoulders, to accentuate the prominence of the musician’s head, emerging from the blue of his suit, thus communicating the flowing might of the music, represented by the body full of vigour and transported by the delicate movement of the hand wielding the bow. Turovsky depicts both landscapes and people with the same mastery. The earth, sky, water and snow are still recognizable but integrated into a complex framework of glazed surfaces or thickly applied paint, harmoniously rubbed or smooth, with clear or dark elements, in pure or diluted colours. The artist does not set out to reproduce the contours of the landscape with photographic precision. The result may convey a turbulent, exalted feeling, like Kokoschka, as for example in Vermont Village, or also on occasion a rhythmic emphasis, as in his painting Snow Landscape with grey, bluish-grey, anthracite grey and blue with traces of white. ABRAHAM A. DAVIDSON Lecturer and Historian Professor of Art History at Temple University in Philadelphia