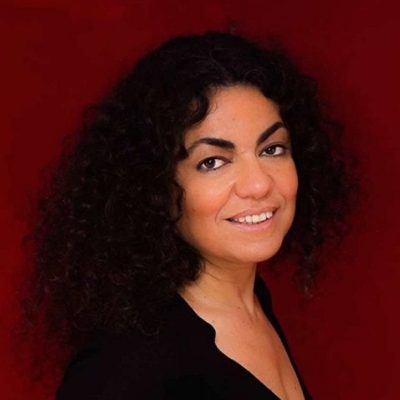 She uses her interdisciplinary knowledge, ranging from architecture to embroidery, to create art pieces from plastic bottles and silk. Her inspiration comes from coral reefs, the human body, and hives. In her artworks, the perfect shapes of nature, the scheme behind each entity, meet a sense of integration. Sahli explores material transformation, exults it, and gives meaning to an artistic universe that is able at the same time to manifest a profound inner meaning.

Born in Meknes, Morocco, Ghizlane Sahli lives and works in Marrakech, Morocco. After architecture studies in Paris, Ghizlane returned to Morocco and settled in Marrakesh.

Enthused by embroideries and tissues, she decided to open a workshop working with textiles, assisted by local artisans.

Ghizlane flourished in this world of tissue during 7 years, and hence developed a certain vision of it. She received the Prize for Creation at the « Trophée Couleurs » in 2009.

In 2012, following the creation of a dress made from waste (trash bags, jerricans, plastic bottles), produced for the Marrakech Mag (a local cultural magazine), Ghizlane decided to close her embroidery workshop and focus on pure artistic creation.

With her sister and two photographer friends, she formed the Zbel Manifesto collective, which works essentially with waste. The collective appeared indeed at the Marrakesh Biennale in 2014, presenting an installation, « Pimp My Garbage ». They were thereafter invited to participate in the inaugural exposition of the Mohamed VI Museum in Rabat.

Today Ghizlane continues her work with the help of local artisan women. In particular, they seek together new ways of working with silk thread. Her «Alveoles » are remarkable. They consist in three-dimensional embroidery, made from the tops of used bottles, covered with silk thread.

She imagines poetic, dream-like worlds where she can experiment and create bridges between her three passions, space and volume, stemming from her architecture studies, silk thread, from her involvement with embroidery, and the environment, from her personal interrogations regarding durable development and the future of the planet.

She enjoys transforming material, subliming it and giving it meaning.