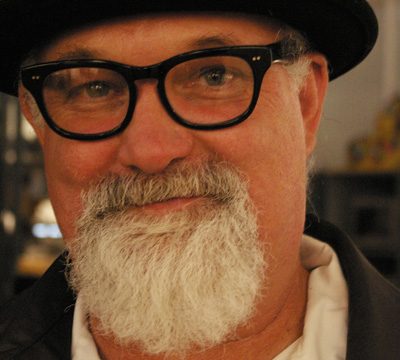 Pyle's work is resolutely imaginative. Since he was a child he developed a unique visual approach "knotted" mark-making with ballpoint pen upon found paper elements. With pen, Pyle creates a dense metallic finish that blows essence into his acute figures. The artist has displayed his works in galleries and institutions throughout the United States, Europe, Australia and Japan.

Pyle’s work is resolutely imaginative. He is a self-taught visual artist.
The artist explains that his inspiration guides the progression from piece to piece, as it makes his compositions, mark-making, and selection of colors. In a way, his whole oeuvre is a career-long continuation of a particular practice: his style of “knotted” mark-making with ballpoint pen upon found paper elements. With pen, Pyle creates indeed a dense metallic finish that blows essence into his acute figures.

The artist’s choice of the ballpoint pen in his art began decades ago when he was a touring music performer, and free pens were the most accessible. Over the years, Pyle has studied, researched, and mastered his practice. There is something undeniably mesmeric about the combination of curious beings. The figures are quite dimensional. Very contemplative representations in graphic contrast with delicate charcoal surfaces.

After 30 years of active work as a working artist, Pyle has acquired a unique personal style, constantly drawing while pushing his creative limits over the years.

“I like making two-color portraits; I don’t really know why I just do. As a kid, drawing faces is what I fixated on. I also find creating an image with limited colour much more challenging than one created with many colours. My motivation to continuously draw over the years has led (quite by accident) to what has turned out to be what I’m hoping is an individual kind of mark-making. Since around the turn of this century, this body of work has been my formal playground for line, texture, volume, form, and so on, along with what has turned out also to be a subtle (or not so subtle) commentary on self-image in our current popular culture that seems to be asking, Who’s to say what’s beautiful?”

Pyle’s work was published early in his career, among many other celebrity comic book artists, painters, illustrators and graphic designers in the highly coveted art magazine Blab!, edited by Monte Beauchamp.

The artist, who had been drawing consistently with this technique since about age 12, has displayed his works in galleries and institutions throughout the United States, Europe and Australia.