Chilean born, Francisco Sepulveda is an artist we love. He is an exuberant, mysterious and magical artist. His multifaceted work is a fusion of his Latin-American, Native American and European roots. This unique perspective, combined with his incessant trips and exposure to different cultures, creates a unique and fascinating universe. Art critics speak of the “Sepulveda galaxy”. Heralding it as a telescope of cultures and a palette of the gods.  Seeing through him a historical reference to his diverse heritage. His strange characters masked with animal heads undertake improbable rituals. Here, Sepulveda reaches out to the heavens and plunges to the depths of hell. He has been compared to an ogre. His artistic appetite, voracious and, his artistic focus is an insatiable need to devour worlds. However, all this in order to remodel his own unique, fascinating, and stunning universe.

His premiere exhibition dating back in 1995. Sepulveda, now regularly displays his works in France, Germany, Switzerland, and the United States of America. His education began at the School of Fine arts Santiago where he studied drawing, painting, and engraving. Continuing his education at the Atelier Wilfredo Lam. Where he explored the experimental techniques of engraving. His latest shows include his 2017 showing at Galerie Claudine Legrand, in Paris and; at the Galerie Le Soleil Sur La Place, Lyon in 2014. Sepulveda’s Public collections can be found at The New York Public Library; Museo Nacional del Grabado, Buenos Aires; Instituo de Artes Gràficas de Oaxàca, Mexico. They are also on display at Bibliothèque Royale de Belgique, Brussels; Bibliothèque de Catalogne, Barcelona; Musée du dessin et l’estampe original, Gravélines; Musée Jenisch-Vevey-Suisse. Finally, now at Louise Gallery since 2018.

The work of Francisco Sepùlveda is essentially an open book. While none of the paintings reflect the artist himself, the audience, however, is represented within them. Every inch of the canvas calls to the viewer. The singular figures are in stark contrast to the rest of the tableau as they sit at the front and are the main focus of the canvas. The physical and mental elements, dance around the central figure and are an essential part of the artists work. Consequently, these elements are crossed by a magnetic wave. Essentially, drawing the viewer in closer. This effect manifests an unyielding charm. Each canvas is a planet. That ultimately gravitates within the “Sepulveda galaxy”. Which is overall, an astonishing universe of his own creation. Every piece is designed to reach the viewer almost instantaneously.

Furthermore, it is here, in the pleasure of the eyes and almost inferno like engulfing of the senses where Sepulveda makes his strongest impact. For Sepulveda, the most important point of impact is the initial shock. This primary perception and how it affects the senses is irrefutably strong. Consequently, it is the vibrant prolongation of this initial, and intriguing contact that is necessary for the audience and the artist. Providing a glimpse into the beginning relationship between graphics and paintings. This correlating relationship between figure and background. The integration of the old world and the new.

Here, Sepulveda’s technical control and mastery of imagination are at its strongest. Consequently, the spontaneity and the randomness, integrate a strong capacity of free improvisation. Indeed, this constructive rigor and this freedom of improvisation are both necessary. This polarizing dichotomy is a force that is necessary for the magic of Sepulveda’s artwork to manifest.

Currently, Sepulveda lives and works between France & Mozambique. His work is full of poetry and surrealistic characters. These themes question history and contemporary society where he lives. International Painting Magazine nominated Sepulveda as Artist of the year in 2009 for Azar. Undoubtedly, he is one of the youngest and most influential representatives of the Latin American pictorial scene in Europe. His mastery of melding two very contradicting worlds, old versus new, challenges archaic stereotypes. Even more so, his surrealistic images have an extraordinary sense of whimsy and magic. He uses all that he has learned from his surroundings and history to bring together an amalgamation of his imagination to the forefront of his artwork. 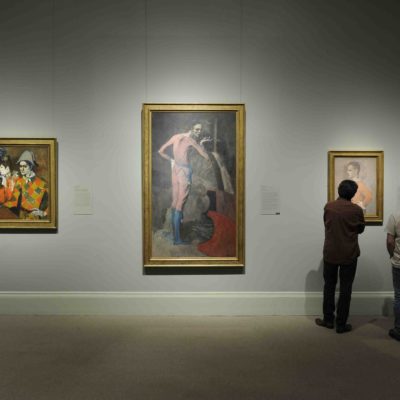