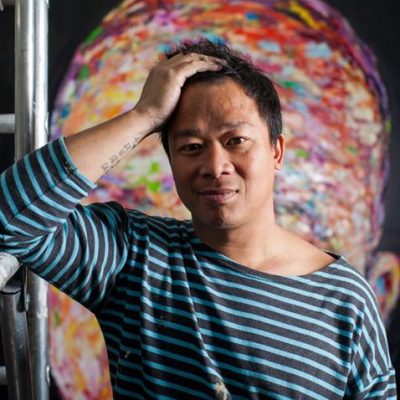 Hom’s work primarily revolves around the creation of portraits. The application of the material or the vivacity of the gesture amplifies his vision of the human being beyond appearances. The portraits capture and transcend the depth of feelings. They are a representation of the complexity of the emotions that we face every day.

Self-taught artist, Hom Nguyen, born to immigrant Parent’s in Paris some time after their departure of his from Vietnam in 1972. He grew up in a modest environment during all his childhood. At the age of 14, his father disappeared and his disabled mother could not work. Hom Nguyen, a young teenager, takes care of his mother and the home. He starts working as a shoe salesman for minimum wage. Growing up he was interested in art and sought to integrate art into his work. He then invented a patina for shoes and created many unique models.

In 2009, he began to integrate drawing to his achievements. The leather of luxury shoes and its many techniques of drawing and patinas gave rise to magnificent creations.

In 2011, he began painting and a patron discovered his talent and continued supporting him to date. A portrait specialist, he interprets through these faces the depth and complexity of human feelings. The lines composing his canvases, at first glance chaotic and disorganized, unveil the features of a face and the torment of these characters. This double reading, created by a play of shadows and contours pushes the viewer to linger on each work because only a long observation can fully understand the canvas. It is an interactivity that allows an introspection of oneself and a certain questioning of those around us.

Depicting the complexity of human feelings

He develops very quickly a certain artistic maturity. Also, he perfects many painting and drawing techniques that involve different tools and materials. Among them, oil, pen, felt gouache, charcoal. From patina to painting, Hom Nguyen quickly develops a graphic style still unknown to the public: the lyrical figuration. A humanist above all, his works are a means of expressing many emotions. They have a cathartic effect for the young artist who has experienced many traumas and a difficult childhood. He was considered an emerging artist in 2013 when he is spotted by MyContemporary.com who sees it as a “meteorite” among his artists.

His first exhibition “Unveiled the veil” reveals this young prodigy who managed to make himself known through social networks. His dynamic, brutal, quasi-animal style lends itself perfectly to his humanist work that captures facial expressions and unmasks the subject. Very close to its origins, Hom Nguyen denounces the trauma of immigrant children in the series “without landmarks” which features the faces of children without mouths or ears, in retrospect to the torment of his childhood.