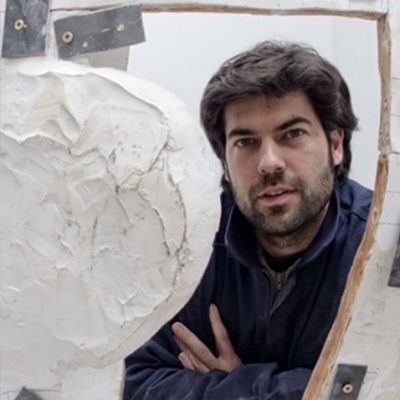 The abstraction suggested by bodies and faces that are about to disappear confers a certain magical aura to the eyes of the spectator. Interaction with the spectator through the grandiosity of the artist’s works is constant. Manuel Martí Moreno shows us that personal, ethereal, world full of archetypes.

Manuel Martí Moreno shows us that personal, ethereal, world full of archetypes. He creates his works using a wide variety of materials. He recovers from the time and functions for which they originally intended: screws, wire mesh, old wood, rusty metal sheets, even earth. All these materials are tangible elements present in nearly all his sculptures.

The abstraction suggested by bodies and faces that are about to disappear confers a certain magical aura to the eyes of the spectator. Interaction with the spectator through the grandiosity of the artist’s works is constant. In this way, he makes us consider and question whether the invasion of the void by these works acquires a dramatic tone. This is also due to the fact that they are not completely modelled. The tension that exists between interior and exterior volume and space is, simply, a frontier line. Moreno knows how to limit by means of outlines, but that he can also eliminate by simply negating shape.

If we analyze his sculptures, even though they seem very physical, they almost instantly awaken a special sensibility in the spectator. The smooth flow of the shapes, the rhythm of the outlines of the bodies. Most of them are starting to disintegrate, providing a continuous melody which combines both calmness and surprise. We could say that his works want to free the space occupied by the void, by the essence they contain. Manuel Martí Moreno speaks to us through his sculptures of physical, material, fragility. However, it is easy to understand that for him the void is dominant, it is always there, between spirit and body, and perhaps this is the reason why the bodies are disintegrating, continuously opening. Body – matter, yes, but also Essence – Void.