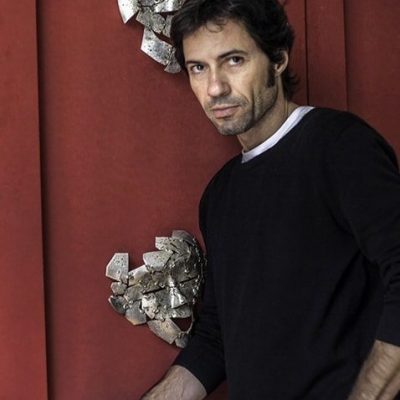 His works transport us to distant realities through a primordial and universal aesthetic. Fascinated by the iconography of ancient culture, Mascarò uses archaic figures to express the contradictions within the human soul. In his work, there is the echo of Pre-Columbian art history. Characterized by an encounter between material, form, and the psychology of the artist, his art uses heads, masks, boats, human and animal figures as symbolic representations.

Mascaró, who has developed his career between Europe and North America, uses figures, be it a guardian, a warrior or a Hindu goddess, as a blank canvas to express the contradictions within the human soul: strength and fragility, the mask we wear every day versus the need to open up and to share, locality and globality.

Last September, he had a solo show at the Saatchi Gallery receiving rave reviews. Alastair Smart, the arts editor and chief art critic of the Sunday Telegraph, described his sculptures as eerie, timeless and evocative. These works – you think – could date back centuries, even millennia. They command those old-fashioned artistic virtues: awe, solemnity, and respect. Mascaró has also participated in public art projects and heavily borrows elements of ancient cultures and the human body just as Moore did.

Meryl Rose, an art collector who sits on The Rose Art Museum Board of Advisors, says: Xavier Mascaro’s work is powerful and strong, yet it has a softness and serene beauty and elegance that is undeniable. It evokes ancient times, cultures and thought; and still, it is completely contemporary and relevant.

Kosme de Barañano, ex-museum director, a full-time professor and one of the most respected art critics in Spain today, adds: Mascaró follows the tradition of the history of Spanish art, from the realistic imagery of Gregorio Fernández to the Baroque painting of Valdés Leal. His language is figurative but it addresses the invisible, presenting pieces of bullfighting life (saddles, tack, horses, ropes) or everyday life (toys, crosses, reliquaries) which always imply the presence of a human being, or as Maurice Blanchot said, his passing, his absence. An absence that is tinged with a tragic feeling of life.