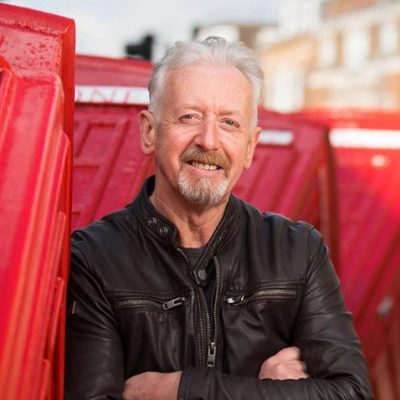 Widely known for his dynamic and imaginative large-scale collages, sculptures, and installations, Mach brings pop-cultural imagery under the lens. His pieces are theatrical yet universally relatable. The creativity and innovation that fuel Mach’s energy pushes him to create striking original pieces from ordinary everyday materials.

“I don’t make work out of bronze I’m doing it with this unlikely, naff material because coat hangers are something you don’t give a second thought to. It’s getting to another audience. You’re not talking to the guy who loves art; you’re trying to reach people who would rather set you on fire and chuck you in the river than pay attention to what you do.” “People always ask if I have one big idea. I have hundreds. And if I have good ideas I want to realise them, make them, build them. But I can’t get them done fast enough – it’s just physically impossible.” Born in Methil (Scotland) in 1956, David Mach rose to prominence in the early 1980s with his ambitious and remarkable large scale sculptures and installations made out of everyday, ordinary bottles, tyres, newspapers, magazines, metal coathangers, matches…. These represent excess in mass production. By using such materials, he explores the resonance of their industrial use and reflects aspects of an aggressive and consumer-driven culture. He aimed to demythologise the practice of art by incorporating these mass-produced elements in often satirical constructions. Mach also rejected the traditional function of sculpture as an avenue for the contemplation of abstract ideas, preferring in his temporal installations to make a point of contact with the urgent concerns of the modern world. His installations in fact can deploy tonnes of published material, magazines, newspapers, etc. and are built in such a way as to create marvellous flowing forms that swirl and twist and seem to either envelope or to expel the most unlikely objects. For instance, Adding Fuel to the Fire, was an installation assembled from a truck and several cars surrounded and subsumed by about 100 tons of magazines, individually arranged to create the impression that the vehicles were being caught in an explosion of flames and billowing smoke, relaying a sense of urgency and movement to its audience. The thousands of magazines were composed into ripples and swells that mimic natural forms like rocks and topography. There was something post-apocalyptic about the juxtaposition of transportation technology and the writhing mass of periodicals that weaved through it. In particular, the rhythm evoked by the swirling piles bore some resemblance to the movement patterns of natural disasters – like hurricanes and tornadoes, these forms were rounded, cyclical, finely textured. The fluidity with which the magazine mass inundated swamped cars, trucks and airplanes subtly recalled scenes of natural disaster aftermath, with household items semi-submerged into layered sediment. But these works do not depict wreckage literally, and Mach’s use of color, texture and scale is masterful, resulting in spatial compositions that impress and delight.

Mach’s practice subverts traditional meanings assigned to objects and reassigns them surreal or anarchic connotations, often surprising the viewer through scale, materiality or concept and prompting the viewer to reconsider their preconceptions. The density of the installations is echoed in match heads where multiple objects make the whole. Thousands of safety matches are in fact glued together so that only the coloured heads of the matches are seen. Mach sees the match heads as having three clear lives: the original head, the performance of burning it; and the burned head forming instantly aged black and white version of the originals. The coathanger sculptures are made in a similar way to the matchheads. Using traditional sculptural techniques a figure or an object is modelled in clay, molded, cast and then the coathangers are laboriously shaped, fitted and welded around the shape. Finally, the artist plates them in nickel for a finishing touch. His figures are indeed defined not by their enclosed form but also by material that emanates from their bodies as we understand them. Like characters on a static-filled television, they appear as illusions or mirages. Their blurry boundaries allow them to exist in a mysterious space beyond the corporeal. As well as exhibiting extensively worldwide Mach has also made a number of commissioned public sculptures in the UK. He has works in public collections at the Tate Britain, Tate Liverpool, the National Portrait Gallery, the Scottish National Gallery of Modern Art, Scottish National Portrait Gallery and the British Council collection among many others. 1974/79 Duncan of Jordanston College of Art, Dundee, Scotland, United Kingdom 1975 Pat Holmes Memorial Prize 1976 Duncan of Drumfork Travelling Scholarship 1977 SED minor travelling scholarship 1978 SED major travelling scholarship 1979/82 Royal College of Art (RCA), London, United Kingdom 1982 RCA Drawing Prize 1988 Nominated for the Turner Prize, Tate Gallery, London, United Kingdom 1992 Won Lord Provost’s Award, RGI, Glasgow, Scotland, United Kingdom 1998 Elected Member of the Royal Academy of Arts 1999 Visiting Professor, Sculpture Department, Edinburgh College of Art 2000 Appointed Professor of Sculpture, Royal Academy Schools, London, United Kingdom 2002 Honorary Doctor of Laws, University of Dundee University 2004 Made Honorary Member of the Royal Scottish Academy 2004 First Visiting Professor of Inspiration and Discovery at the University of Dundee, Scotland, United Kingdom 2006-2010 Elected to the board of the National Portrait Gallery 2011 Bank of Scotland Herald Angel Award 2011 winner for Precious Light Glenfiddich Spirit of Scotland Award for Art