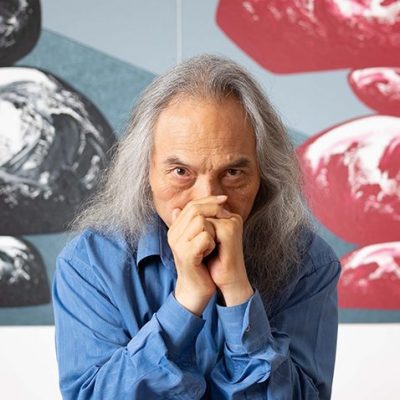 Ma Desheng is one of the more outspoken and radical artistic voices of the Chinese Cultural Revolution. He paints, draws, and sculpts stones that he sees as possessing souls, expressing himself under the guidance of the “vital breath”, the famous qi. This physical and sensitive relationship is the bearer of a universal hope, Harmony.

Painter, engraver, calligrapher, performer, poet … Ma Desheng is above all a free man and an artist whose work reflects a furious desire to live. He is one of the founding members of the Xingxing group (“Les Etoiles”). In particular, the movement is famous for being the first post-Maoist dissident artistic movement in China. Desheng left definitively in 1985 before settling a year later in Paris.

The female body has always been a recurring theme in Ma Desheng’s work. He portraits the fascination and the seduction of the female entity through different techniques. For example, in the first period, he used traditional techniques such as calligraphy, to felt pen on paper, to large formats in acrylic. Symbols of peace and beauty for Ma Desheng, the feminine silhouettes illustrate a carnal need, the life itself. His art is like dancing on the canvas, in a creative process in which freedom is the main character.

Born in Beijing in 1952, Ma Desheng is one of the first contemporary Chinese artists who anticipate the reform and opening movement initiated by Deng Xiaoping in the late 1970s. Health issues forced him to crutches, which did not limit his productivity and creativity at all. Self-taught, starting as an industrial designer and then as an engraver, he quickly came into contact with other internationally renowned Chinese artists, such as Ai Weiwei or Wang Keping. It was in 1979 that Ma Desheng founded Les Etoiles (Xingxing). After difficult times, the end of the Cultural Revolution and the Maoist period imposing socialist realism, the work of the group of Stars and Ma Desheng appears as a true renaissance.

Ma Desheng participates in the revival of Chinese painting by giving a central place to the human body. The landscape is instead dominated by an ancestral atmospheare. Paradoxically, it is when he leaves China in 1985 to settle in France a year later, that he will give a real boost to his painting. Between abstraction and figuration, the feminine silhouettes become indeed the real subject of the painting. In particular, these are like distant memories of our “Venus” prehistoric callipyges. They invade the canvas, leaving a powerful spiritual trace.

His works are held in public and private collections around the world. These incude The British Museum, London, Museum Cernuschi, Paris, Museum of Modern Art of the City of Paris, the Association of Contemporary Art Museum of Chamalières, France. In England he is at the Museum of Oxford, London.