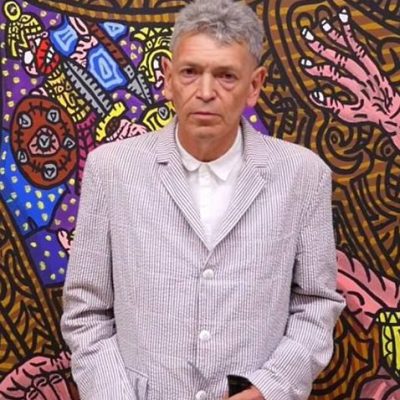 Widely recognized as a godfather of the figuration libre, Robert Combas art is deeply rooted in depictions of the human body. These figures are often seen in wild, orgiastic settings. He creates a hectic narrative. Highlighting the ravages of war, crime, sex, and various phases that make up the constant changes in life.

Robert Combas is widely recognized as a progenitor of the figuration libre movement. This movement began in Paris around 1980 as a reaction to the art establishment in general and minimalism and conceptual art in particular.

Figuration libre is often regarded as having roots in Fauvism and Expressionism. In particular, it links to contemporary movements such as Bad Painting and Neo-expressionism. It draws on pop cultural influences such as graffiti, cartoons and rock music. It pursues an attempt to produce a more varied, direct and honest reflection of contemporary society. Often satirizing or criticizing its excesses.

Robert Combas own work has always been strongly rooted in depictions of the human figure. The figures are often in wild, violent or orgiastic settings. Usually on large, often unstretched canvases, Combas crowds his flat pictorial space with a teeming proliferation of bodies. The poetry and designs of his art share the compulsive patterning of folk and outsider art. He creates hectic narratives of war, crime, sex, celebration and transgression—in short. Every phase that makes up the constant flux of modern life. In recent years a strong autobiographical strain has been evident in his work, which was present only on a subliminal level, if at all, in the earlier work.

Combas often seems to be offering the work as critique—of both the art establishment and society at large. The lampoon of a society where all are anonymous except in the individual recognition and gratification. This is a typical trait of Combas’ work throughout his career.

While Combas’ works often seem to carry an element of shock or confrontation, he insists the images are meant to engage the viewer. His works’ execution in vibrant color and bold. He communicates a spirit of proletarian camaraderie that offsets the tendency to overwhelm. Especially in the larger works.

In a biographical note, the artist asserts his aim is to “provoke, that is, to trigger a reaction in the spectator only to ‘invite’ him. The aim is beckoning him in and whispering in his ear ‘come over and talk to me. I want to tell you about the stupidity, violence, beauty, love, hatred, seriousness and fun, the logic and senselessness that pervade our day-to-day lives’ ”.