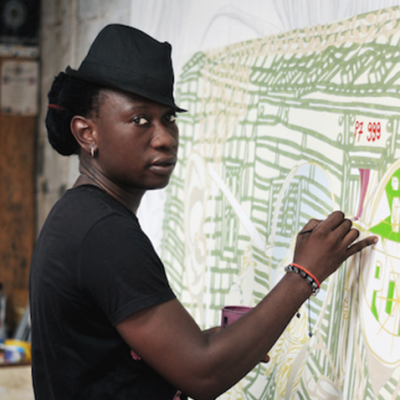 Born in 1979 in Port-Gentil, Gabon. He began by painting hairdressers' fronts and then left to devote himself exclusively to art, through an original approach: he explores hairdressing in the urban space. He sees in it the signs of social rank, of the expression of a thought, of cultural belonging.

Born in 1979 in Port-Gentil, Gabon Boris Nzebo began by painting hairdressers’ fronts and then left to devote himself exclusively to art, through an original approach: he explores hairdressing in the urban space. He sees in it the signs of social rank, indeed as an expression of a thought, of cultural belonging.

Boris Nzebo ’s multilayered paintings and collages conjure the astounding visual complexity typical of the West African city. Entirely drawing his subject matter from the urban culture in his hometown Douala, Nzebo invests his works with the psycho-geographical impulse. Their primary subjects are the elaborate hairstyles of men and women. In particular, these subjects lay on city views as integral features of the architecture. Nzebo finds inspiration in the hand-painted advertising illustrations of West African beauty parlors. The hairstyles incarnate in his view the intimate relationship between the individual and street life. This symbiotic connection allows for a multiplicity of readings of the image. His canvas render levels of information in a sort of visual polyphony. This same polyphony integrates indeed humans and the space they inhabit in a rhythmical way.