If our art market forecasters are clever, they should pay attention to the recent auction of modern and contemporary African art at a London based auction house. While the most recent sale of contemporary African art may not be the highest in the category. The auction is a significant increase from its sale last year. Marking an advantageous nod to the future.

Setting a new auction record for 11 artists, most of whom are unfamiliar to the Western art world. However, they will not be unfamiliar for long. Before her work began tearing up records in the evening auctions in New York and London, Nigerian-born artist Njideka Akunyili Crosby posted a sharp increase in auction prices at modern and contemporary African art sales.

Perhaps the most notably at the auction is rising of Congolese talent Eddy Kamuanga Ilunga. His vibrant painting of two figures whose bodies resemble the inside of a cell phone, Congolese Palm. The painting exhausted its presale estimate of $32,000–45,000 to sell for over $100,000. Consequently, beating his previous record of $92,124 set last year.

The significant share of the total, however, was driven by El Anatsui‘s work. He has an established international collector base and a reputation. As the representative for Ghana in the Venice Biennale this year, El Anatsui has long been a blue-chip powerhouse. Also remarkably, he is the subject of a retrospective in Munich organized by the late Okwui Enwezor and Chika Okeke-Agulu. 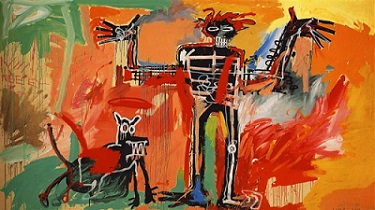